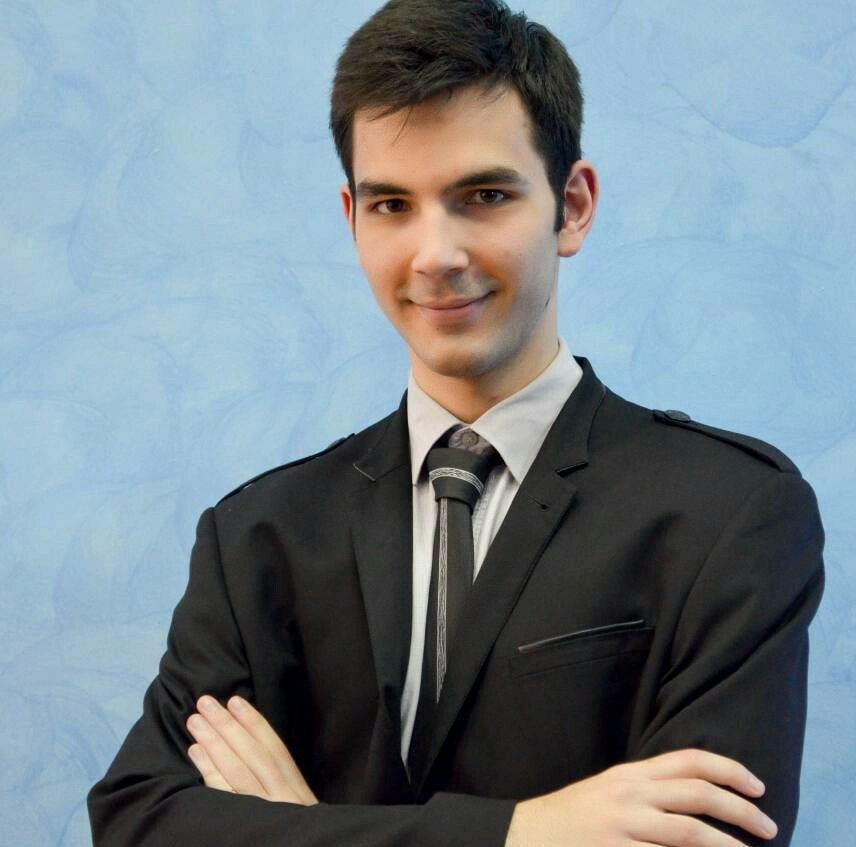 v
​Aleksa Mirkovic was born in 1997. in Valjevo,Serbia, where he started music education.

​As a student with all highest marks, he was awarded a diploma Vuk Stefanovic Karadzic once in Primary school and two times in Secondary school. Mirkovic was declared for The best student of generation in Primary Music School "Zivorad Grbic" (Valjevo-Serbia), and in High Music School "Kosta Manojlovic"(Belegrade-Serbia).
He has finished High Music School "Kosta Manojlovic"(as instrumentalist), and his final exam-accordion recital was declared for the best one, and he was also awarded for artistic achivements.
Mirkovic has also finished High Music School "Zivorad Grbic'' (theoretic department) as a winner of Zivorad Grbic Award- for the most successful presentation of school in competitions, and also winner of The best music theoretician award. He recieved award The best student granted by Student dormitory "Zmaj" in Belegrade (Zemun), where he lived for 3 years.
Serbian Royal Family awarded him for achivements during education.
He won more than 85 prizes in competition in Serbia and abroad. Most of them are First prizes (63 - 33 times winner), but the most important of them are:
⦁ Wins:
1. 1st place at Trophy Mondiale Accordion (composition category) in Onet le Chateau, France, 2017 and Loule, Portugal, 2019
2. International Accordion Championship and Festival in Sydney (Australia)
3. Graz,Austria (Akkordeonfest 2016.);
4. Alcobasa,Portugal (Thropy of Portugal, 2015);
5. Belgorod,Russia (Festival "Harmony" 2014-Grand prix and two first awards 2016);
6. Prague,Czech Republic (Accordion days 2015);
7. Ljubljana,Slovenia (Ithaka, 2008);
8. Albena,Bulgaria (Hopes,talents,masters 2008),
9. East Sarajevo, Bosnia and Hercegovina (Akordeon art 2010,2011,2012,2014).
10. Daugavpils,Latvia-(Naujene, Grand prix- 2017, first prizes 2014 and 2015)

On his repertoire are pieces from baroque to 21st Century.

He was awarded with Award of City of Valjevo (2018) and accolade of Municipality of Zemun (2014,2015,2016) for achivements. Mirkovic was winner of Scholarship for specially talented people from Serbian Ministry of Education, and recommendation for following his  musical development and also a winner of Award of Russian Fund of piece and Slovenian Fund ''Horak''. He is winner of Competition for Serbian Music Talents 2015. With his composition ''Angelis'', his chamber quintet won 2nd prize in Competition of students dormitories in Belgrade. He is stipendist of  Foundation ''Jankovic Andjelkovic'' - Belgrade, Serbia.

He is finalist of music competition The best musical mind organized under the patronage of Berklee College of Music.

He was performing as guest at the concert ''Strings of love'' of String quartet of Great symphonic orchestra P. I. Tchaikovsky, in Hotel Splendid in Budva (Montenegro), and also performed concert as a part of Russian music festival Bolshoi festival (Mecavnik, Serbia) by Serbian famous film director Emir Kusturica.

Mirkovic is an official artist of Fisitalia - Italian accordion factory.
​He is President of Music association ​Music constellation​, and Secretary of Association for promotion of music Arpeggio (Bosnia & Herzegovina). Mirkovic is creator, participant and head of organization of 1st International art festival ''VAUS'' (2019).

At the moment, he is student of Music Academy in East Sarajevo (Bosnia and Hercegovina).